The Wind River Festival can be described as CHAOS. Chaos in the form of a mass start as paddlers leave the Starting Line together, and rally downstream all at once. Such was the case the last few years, and one could only continue the tradition in 2013.

The Upper Wind River is considered Class IV/IV+, depending on water levels. It is generally a six mile run, that begins in the flatwater near Carson, Washington, and quickly picks up its pace as its rapids become continuous. Rapids feature boulder gardens, boofs, big water, and sometimes, sticky holes. It’s an active stretch of river, and the perfect location for a race.

Keeping with tradition, the Upper Wind River Festival features short and long boat kayak races, as well as cataraft and raft races. The race itself begins at Stabler, and finishes about 2.5-3 miles downstream in the flats below “Climax”. The first race of the Western Whitewater Championship Series, it is unique. It is a mass start, and is absolute CHAOS,Â as paddlers from across the Northwest show up to test their skills.

Over thirty paddlers gathered for the racerâ€™s meeting, learning the do’s and dont’s, and doing their last-minute stretches.

Cards were drawn, declaring start order with Aces, 2 and 3â€™s starting downstream from Jacks, Queens and Kings. Paddlerâ€™s lined up facing the bank, forcing paddlers to start switch. This led to an interesting menâ€™s start, with over half the field back-paddling for the first hundred yards. The Menâ€™s race was a fight until the end between 25 paddlers, with Dan Rubado coming across the line in first, quickly followed by Trevor Sheehan, and Laurence Rosen. 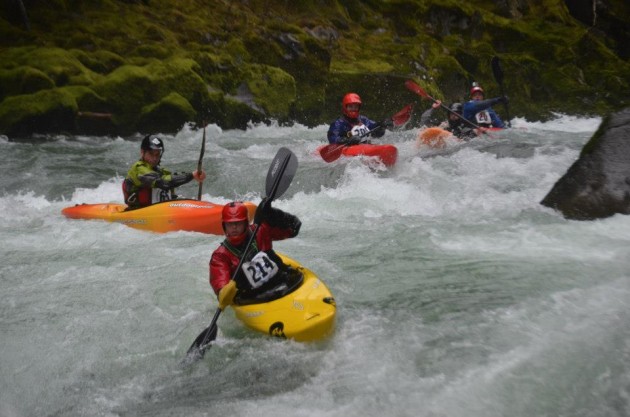 Short Boat Men making their way through the Horn

The womenâ€™s start of 9 paddlers was much more calm, save for the Dynamic Duo captained by Nicole Mansfield and Katrina Van Wijk. The countdown was given and on go, the ruckus began! 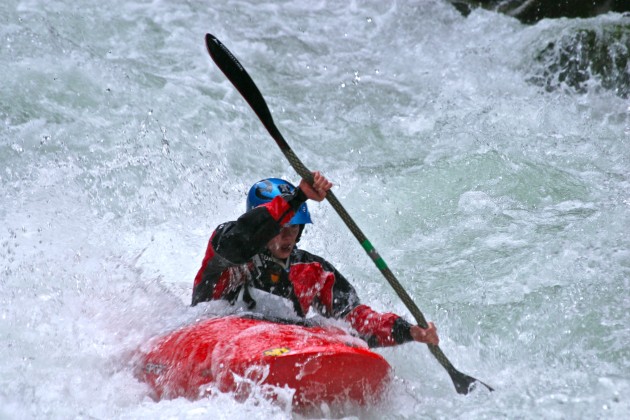 Myself paddling hard through the Horn

Raft and cataraft races followed with Zach Collier of NW Rafting winning the cat race, and Tim Brink of ORT and his team, winning the R2 event.

Special Thanks to ORT and Next Adventure for Organizing the event, and for the scrumptious post-event BBQ and activities! 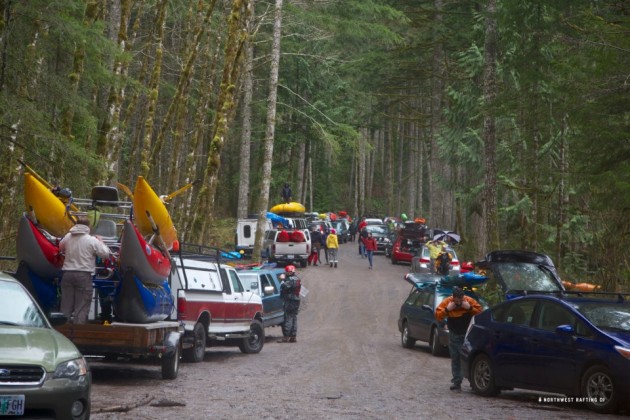 The scene at the takeout

See you on the river,

Sundance Kayak School was started on the Rogue River in Southern Oregon way back in 1973! And was created for one very specific reason: to teach whitewater kayaking. Sundance Kayak School is dedicated to sharing the love of rivers and paddle sports through Education, Involvement and Enjoyment.
View all posts by Team Sundance →
← Want to Become an Instructor?
Hagen Gorge, WA →