The river has a unique way of communicating and unfolding its secrets.  If you listen you will find the river carries a constant and ever graceful song that is measured at a rate of cubic feet per second (cfs).  As you sit by its side and navigate the moving waters you will also find that rivers are nature’s greatest master pieces as the water sculpts and carries life to its banks.  As a river runner it is important connect with the river’s current, anticipate where it is going with a good understanding of what to expect and how to react to its bends and changing chorus. 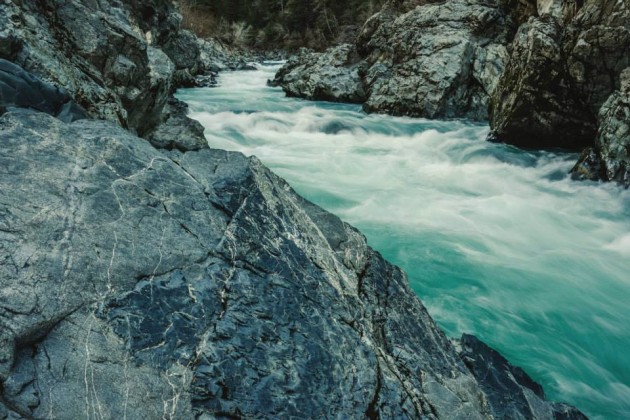 Appreciation for whitewater begins with understanding how whitewater rapids are formed.  There are three primary natural forces that produce the rapids we love, gradient, constriction and obstruction.

Gradient refers to the steepness of a river and this is measured by elevation lose over the distance traveled.  With lower gradients, rivers become slower and gentler.  Higher gradients are associated with large rapids that tend to be more stacked. The Rogue River, for example, drops 14 feet per mile and is considered mostly a Class II-III river (we will get into classes soon).

Constriction occurs when a river’s flow is forced into a narrower channel or between two unyielding rocks. This pressure causes the water to flow more quickly and to react differently to obstacles.  To produce an at home model of constriction, put your thumb over part of a garden hose spout.

Obstruction can be anything in the path of the river such as a boulder, log or ledge that blocks or changes the flow of the river.  The meeting place of the river and an obstacle can produce a number of features such as a “pillow”; when water flows backwards upstream of the obstruction, a “pour over”; when the water flows over the obstacle, often resulting in “hydraulics” or “holes” as the river flows back on itself similar to a whirlpool on its side.  Holes are characterized by foamy, aerated water and can feel like an actual hole in the river surface.  The most dangerous obstruction is wood of any form.  Wood in the river creates a “strainers” which allow water to flow through but trap solid objects, just like kitchen strainers and spaghetti noodles.  On the downstream side of an obstruction an “eddy” is formed; where the current suddenly slows or ever reverses itself.

Find the holes and obstructions of Submarine Hole on the Illinois River in Oregon at about 400 cfs. 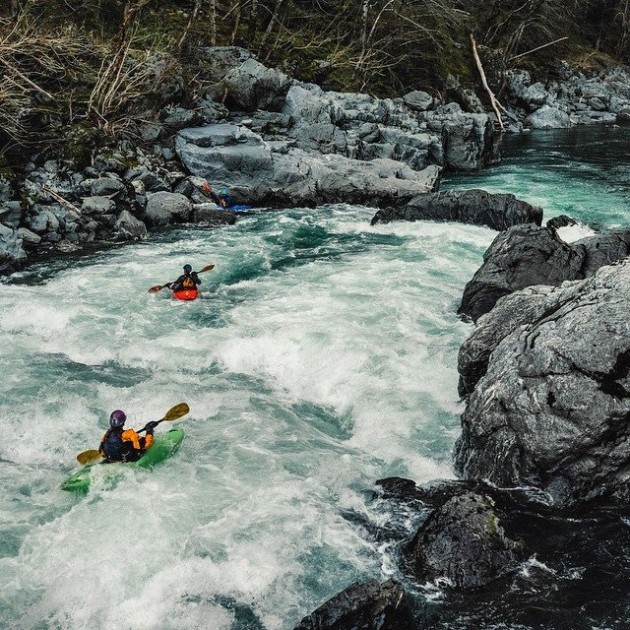 The next big question of course is, “What class is that?”  The International Scale of River Difficulty, developed by American Whitewater, has provided the boaters with the most universal way to communicate with each other.  This rating system is a guideline to evaluate difficulty and potential danger of rivers and individual rapids throughout the world using the scale of Class I through Class VI.  An exception to this scale is the Grand Canyon stretch of the Colorado River which operates on a Class 1-10 system.

Rivers and the river running world are beautifully and tremendously diverse therefore it is crucial to bear in mind that the Class rating system is purely a guideline that is vulnerable to change and subjectivity.  Factors such as type of craft being maneuvered, fluctuating water level, water temperature, remoteness and the ever present and changing hazards will influence the difficultly of any run.

One of the greatest influences of change in rapid difficulty is fluctuating water level.  It is common for rising water levels to increase rapid difficulty because the water is moving faster with fewer eddies and less reaction time. However, it is also true that some rapids can become more difficult with lower water because more rocks begin to show and moves become increasingly technical.  Check water levels, do your best to know what you are getting into before you get there and if there is any doubt, scout!

The picture below shows the muddy rush of high water on the Rogue River.  Although I have seen this river several times at summer flows this influx of cfs changes everything! 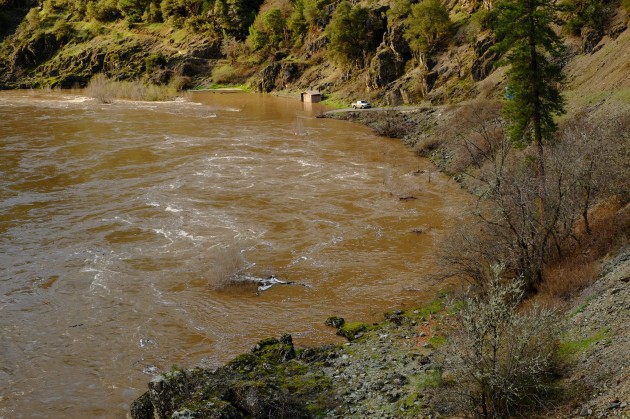 It is also important to remember that the classification of a rapid or river has absolutely nothing to do with level of fun.  We are all “class fun” boaters!  The enjoyment of a river is found at the confluence of attitude and appreciation not at the bottom of monster drops.  There is a strong mix of desire and pressure to move up the rapid ladder.  Take your time.  It is important to make difficult moves in low consequence runs before trying to make easy moves on high consequence runs.  And if you consider yourself a class IV boater one day this doesn’t mean you must be a class IV boater the next day.  You can say, “Not today,” you can portage and you can still be an incredible boater having the best day ever!

Alright, having read the disclaimer you are all ready for the descriptions of each class as presented by the International Scale of River Difficulty.  Enjoy and try to decipher exactly which class is your happy place!

Fast moving water with riffles and small waves.  Few obstructions, all obvious and easily missed with little training.  Risk to swimmers is slight; self-rescue is easy.

Straightforward rapids with wide, clear channels which are evident without scouting.  Occasional maneuvering may be required, but rocks and medium-sized waves are easily missed by trained paddlers.  Swimmers are seldom injured and group assistance, while helpful, is seldom needed. Rapids that are at the upper end of this difficulty range are designated “Class II+”.

Rapids with moderate, irregular waves which may be difficult to avoid.  Complex maneuvers in fast current and good boat control in tight passages or around ledges are often required; large waves or strainers may be present but are easily avoided. Strong eddies and powerful current effects can be found, particularly on large-volume rivers.  Scouting is advisable for inexperienced parties.  Injuries while swimming are rare; self-rescue is usually easy but group assistance may be required to avoid long swims.  Rapids that are at the lower or upper end of this difficulty range are designated “Class III-” or “Class III+” respectively.

Intense, powerful but predictable rapids requiring precise boat handling in turbulent water.  Depending on the character of the river, it may feature large, unavoidable waves and holes or constricted passages demanding fast maneuvers under pressure.  A fast, reliable eddy turn may be needed to initiate maneuvers, scout rapids, or rest.  Rapids may require “must” moves above dangerous hazards.  Scouting may be necessary the first time down. Risk of injury to swimmers is moderate to high, and water conditions may make self-rescue difficult. Group assistance for rescue is often essential but requires practiced skills. A strong eskimo roll is highly recommended. Rapids that are at the lower or upper end of this difficulty range are designated “Class IV-” or “Class IV+” respectively.

Extremely long, obstructed, or very violent rapids which expose a paddler to added risk. Drops may contain** large, unavoidable waves and holes or steep, congested chutes with complex, demanding routes. Rapids may continue for long distances between pools, demanding a high level of fitness. What eddies exist may be small, turbulent, or difficult to reach. At the high end of the scale, several of these factors may be combined. Scouting is recommended but may be difficult. Swims are dangerous, and rescue is often difficult even for experts. A very reliable eskimo roll, proper equipment, extensive experience, and practiced rescue skills are essential. Because of the large range of difficulty that exists beyond Class IV, Class 5 is an open-ended, multiple-level scale designated by class 5.0, 5.1, 5.2, etc… each of these levels is an order of magnitude more difficult than the last. Example: increasing difficulty from Class 5.0 to Class 5.1 is a similar order of magnitude as increasing from Class IV to Class 5.0.

These runs have almost never been attempted and often exemplify the extremes of difficulty, unpredictability and danger. The consequences of errors are very severe and rescue may be impossible. For teams of experts only, at favorable water levels, after close personal inspection and taking all precautions. After a Class VI rapids has been run many times, its rating may be changed to an appropriate Class 5.x rating. 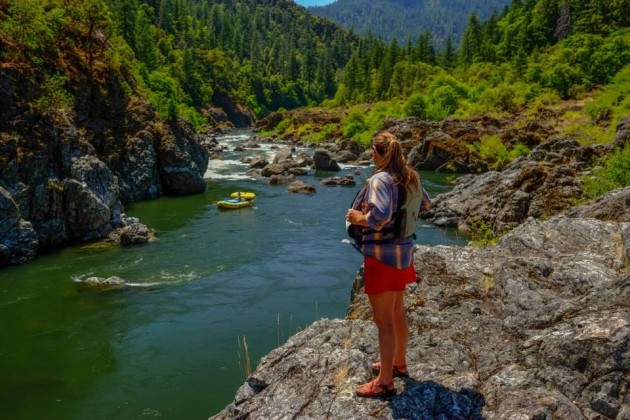 Reading water is much like appreciating an ageless, detailed and powerful masterpiece, you can do it for the rest of your life and new wonders will continue to be revealed.  One of the best bits of advice shared with me is that water moves in a straight line until it hits something and then things get exciting!  How do you understand the song of the river?

Thank you and enjoy the sweet meander!

Posted on May 2, 2015 by Team Sundance in Conservation

Sundance Kayak School was started on the Rogue River in Southern Oregon way back in 1973! And was created for one very specific reason: to teach whitewater kayaking. Sundance Kayak School is dedicated to sharing the love of rivers and paddle sports through Education, Involvement and Enjoyment.
View all posts by Team Sundance →
← Youth Kayak Scholarship & Discounts Available
Hannah’s Inspirational Kayak Story →