Marion Franck, columnist at The  Davis Enterprise, shared her Sundance story from 20+ years ago.  After recently paddling with Marion, I asked if I could share her story with the all of you. So with that… here it is!

REUNION REMINDS ME HOW I BECAME A KAYAKER

Nearly 20 years ago I drove six hours and arrived all alone at Sundance Kayak School in southern Oregon for my first lessons in whitewater kayaking. In order not to leave our young children, my husband and I had decided to try this new sport one at a time, I the first summer, he the next.

Stepping into the unfamiliar environment of a 9-day kayaking school, I felt anxious and alone. 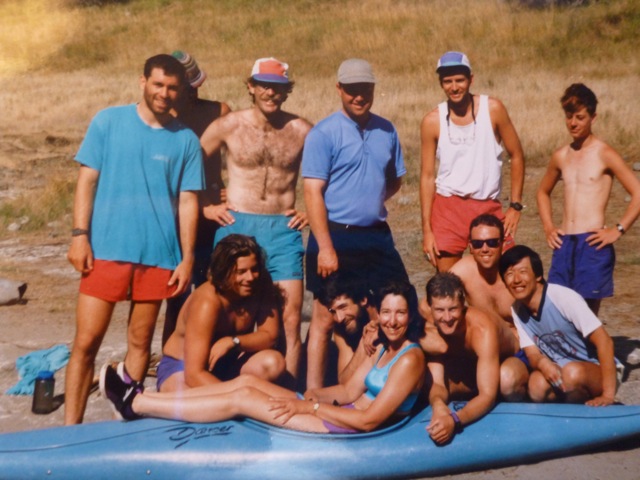 I soon encountered Hayden, our lead instructor, who was younger than I by at least ten years, skinny, bearded, with kind brown eyes. He greeted the prospective kayakers warmly and talked about safety and the skills we would be learning.

Rolling (an important technique to right yourself after capsizing) sounded especially difficult.

At 45, I was the oldest woman in the class. I had whitewater experience as a raft guide, but that didn’t help me with rolling. We spent five days practicing close to the school, and then packed for a four-day trip on the 40-mile wilderness run of the Rogue River.

I hadn’t yet managed a single, independent roll. The river would be bigger, with real rapids. I felt vulnerable–emotionally and physically. 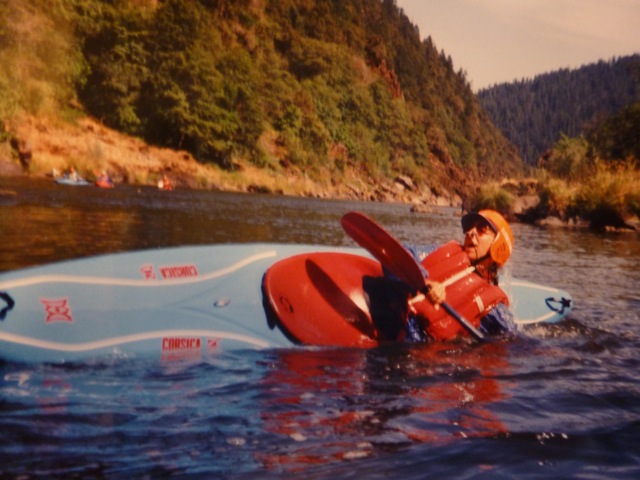 Marion learning how to Eskimo Roll the kayak

I needn’t have worried. Whenever a newbie capsized, Hayden or another instructor zoomed to the rescue, like Mom when a toddler stumbles, often righting us with a boat-turning technique called “the hand of God.”(The floundering kayaker does nothing—you don’t even realize a rescuer has come–but suddenly you’re upright.)

The relief I felt being rescued led me to remember the only scientific fact I know about ducklings: they imprint on Mama and follow her anywhere. I began to view Hayden as my mother duck.

My trip began to fill up with small victories–a rock skirted, a rapid successfully run, and a tent I set up alone, for the first time ever, in a downpour.

Although the triumphs were mine, I remember Hayden as part of the story. Maybe he reassured me on the water or praised me after the tent episode. I don’t remember, but I loved Mama Duck more than ever. 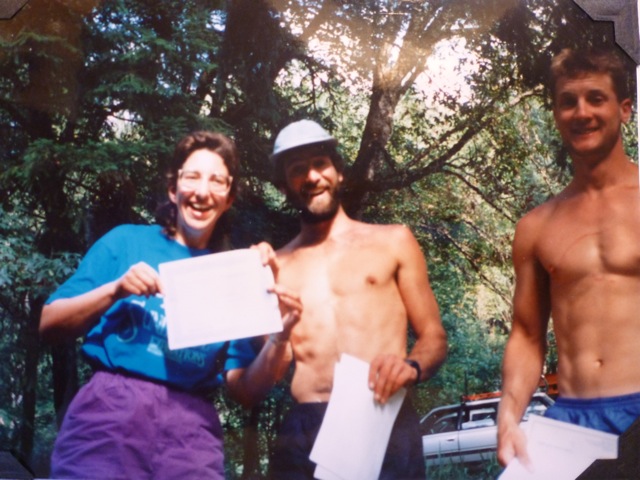 Graduation Ceremony at the end of the 9 Day Kayak School

When the trip ended, I was sold on kayaking, and for several years, I sent Christmas cards to Hayden, thanking him for my new sport. Eventually I stopped sending cards, but I still thought about him.

A few weeks ago I learned that he would be a guide on our six-day kayak trip down the Middle Fork of the Salmon River in Idaho. The river was going to be especially high this year and Hayden and his wife were coming to help.

I was excited beyond belief. After 20 years, I would reunite with Mama Duck. I told myself he might have grey hair now, but I didn’t believe it.

On the first day I met a tall, dark-haired kayaker whose eyes could have been Hayden’s, but this man was taller than I remembered, and in some way, more reserved.We exchanged greetings. Once we began paddling, the swollen river clamored for my focus and non-stop attention.

I didn’t get much time with Hayden. He was assigned to the advanced boaters, so I only watched his graceful paddling from a distance. I told him I was excited to see him again, but I realized there was no way his memory could have the drama of mine.He doesn’t even teach kayaking anymore, having found better-paying work as a fishing guide.

I wanted to talk to him about what kayaking means in my life.

I wanted him to know that I’m a different person because I kayak, because I take an athletic risk and have learned to be strong in that way. I wanted to tell him that now, at 64, I’m usually the oldest woman in the group, and how remarkable that seems.

I wanted to tell him how being out in nature would never have moved me as it does, if I hadn’t been on water, in water, even under water, and that now, I roll up. I wanted to tell him how I observe rivers, especially my home river, for its rises and falls and the effects of weather and how that leads me to track the animals near the river and the people in the small town up there.

If I hadn’t felt safe in my first lessons, if I hadn’t known that someone would rescue me when my roll failed, if I hadn’t seen Hayden’s bright smile every step of the journey twenty years ago, my passion might not have emerged.

I never managed to say all that to Hayden, but I told him I was his baby duck. That must have been a strange thing to hear from a tall, 64-year-old kayaker in a bulky blue and purple drysuit, but I think he understood.

I loved water before he taught me to kayak; now I dance with rivers in an ever-closer embrace.

JR's enthusiasm for life readily extends to all things whitewater and at Sundance, we consider him the guru of everything kayak. He spends his summers on the Rogue River as an awesome kayak instructor and during the off season, he gravitates toward any body of water that will give him some thrill. He tends to surround himself with others that share the same passion.
View all posts by JR →
← J.R. Explored Baldface Creek
Charlie the Ducky Master →