In the far Northwest corner of California, the Smith River flows crystal clear through the heart of the Redwood country and is one of the “crown jewels” of the Wild and Scenic River system.  Breathtakingly beautiful, this is California’s only undammed, free-flowing river.  The river system is entirely protected in California, but some of this gem’s most pristine headwaters remain unprotected in Oregon.

Baldface Creek has been an obsession of mine for some time now.  As a kayaker growing up on the Smith River, it represents one of the most committing and inaccessible places that you can go in a kayak, and through country that for most, exists only on a map.  After being turned back by snow on my last attempt to go in with my friend Zach Collier, a perfect set of conditions materialized on my birthday, and I knew that this was it.  I called fellow paddler Dan Menten and our shuttle crew, we grabbed a pizza and headed into the mountains. 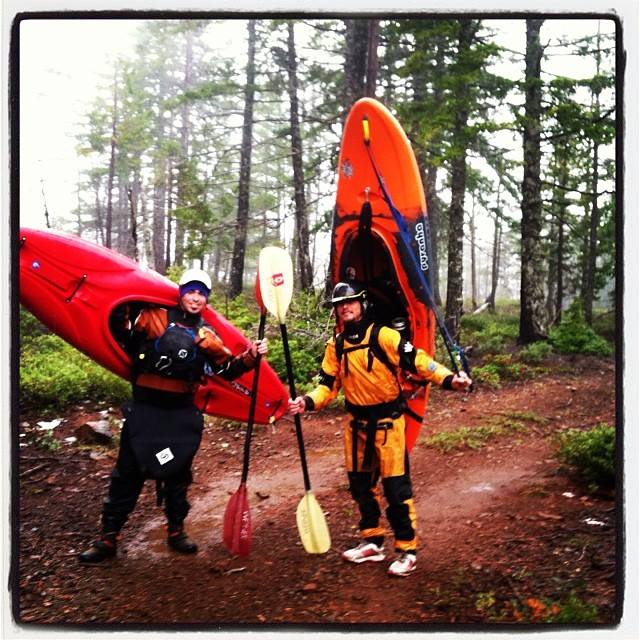 Our logistics package was somewhat ambitious.  Last spring, Zach completed the trip at low water, backpacking and alpaca floating down the creek in two days.  Not wanting to carry overnight gear, we decided to camp at the locked gate on the road to Biscuit Hill and complete the entire trip down to the town of Gasquet in one day.  6 miles of hiking followed by 6 miles of class 4-5 creek, then 16 miles of big water North Fork Smith River.   Dan and I started hiking before light and as dawn broke, the unique scenery of the South Kalmiopsis materialized out of the mist. 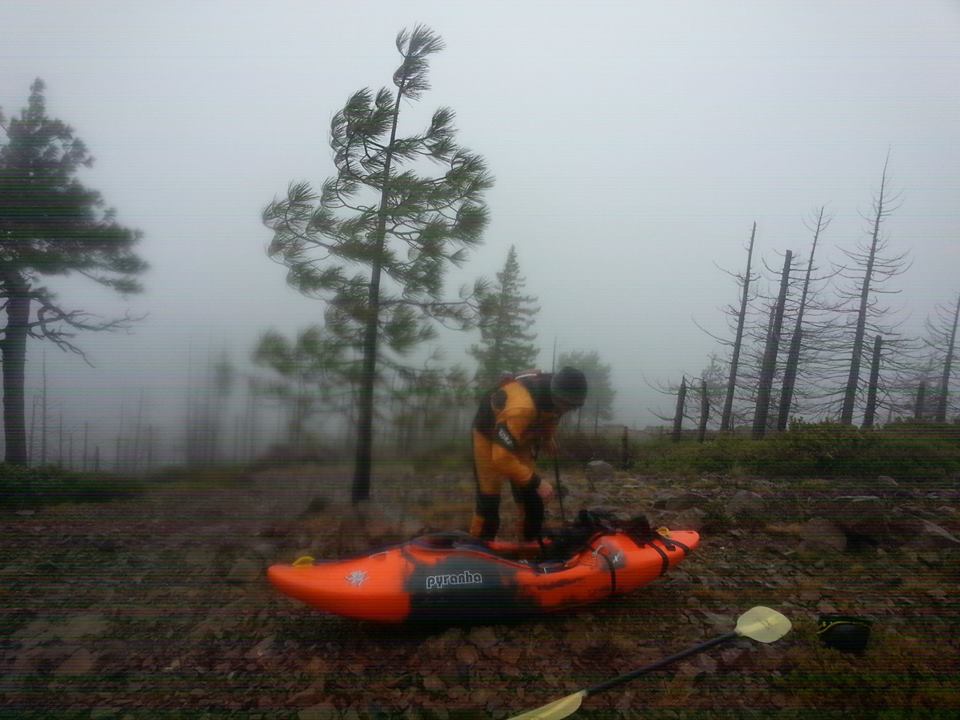 Twisted trees and shrubs cling to the red earth in this ancient, unearthly landscape.  The area is characterized by its serpentine soils and wetlands, which are responsible for the area’s great botanical richness and diversity. 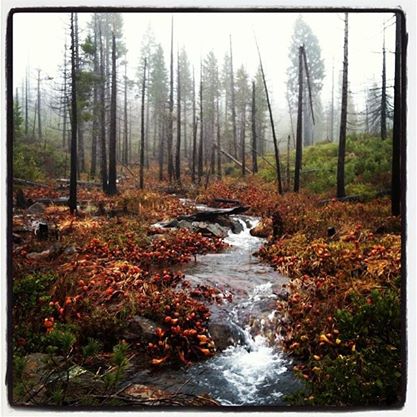 The unique environment is home to rare, endemic plants such as Darlingtonia Calfornica – the carnivorous “Pitcher plant”.

Squinting through rain and a strong wind, Dan and I marveled at our surroundings as we trotted down Biscuit hill on our way to the creek.  Our first glimpse of the creek filled us with excitement.  A rather large hole through a gap in the trees. Looks like we were to have plenty of water on this trip. The flow looked manageable and we had a long way to go so after a quick rest we put on at around 11am. 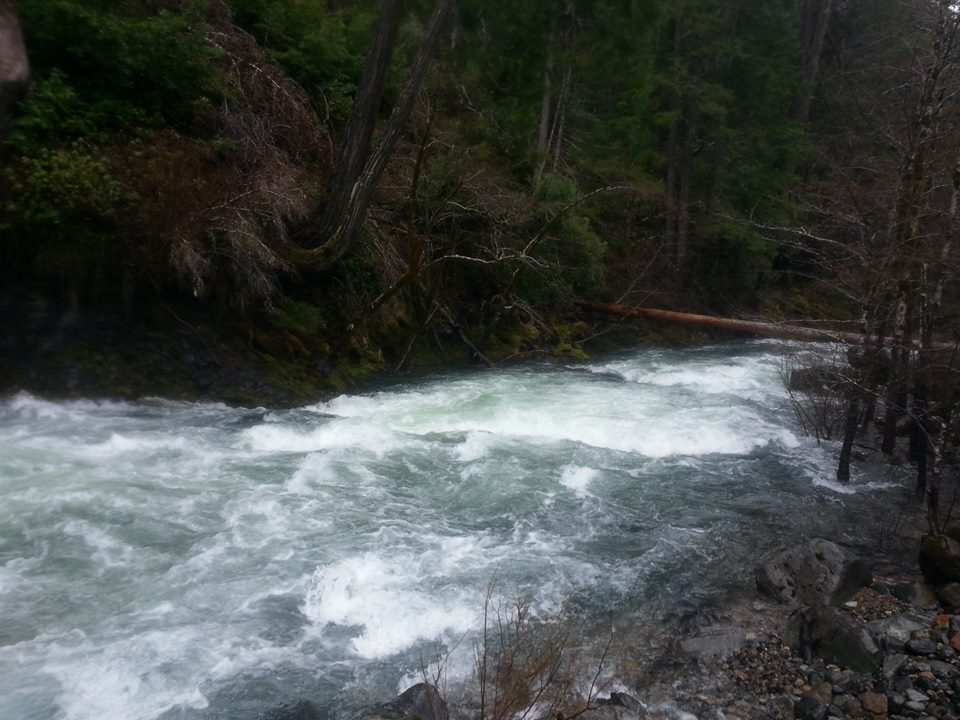 The scenery was breathtaking.  Old growth Port Orford Cedar trees clung to rocks overhanging the creek. Streams and waterfalls poured out of the bank on both sides as we floated by.  Willows choked the channel in a few rapids, requiring careful boat scouting, and soon we passed Biscuit Creek, the first major tributary on the left. 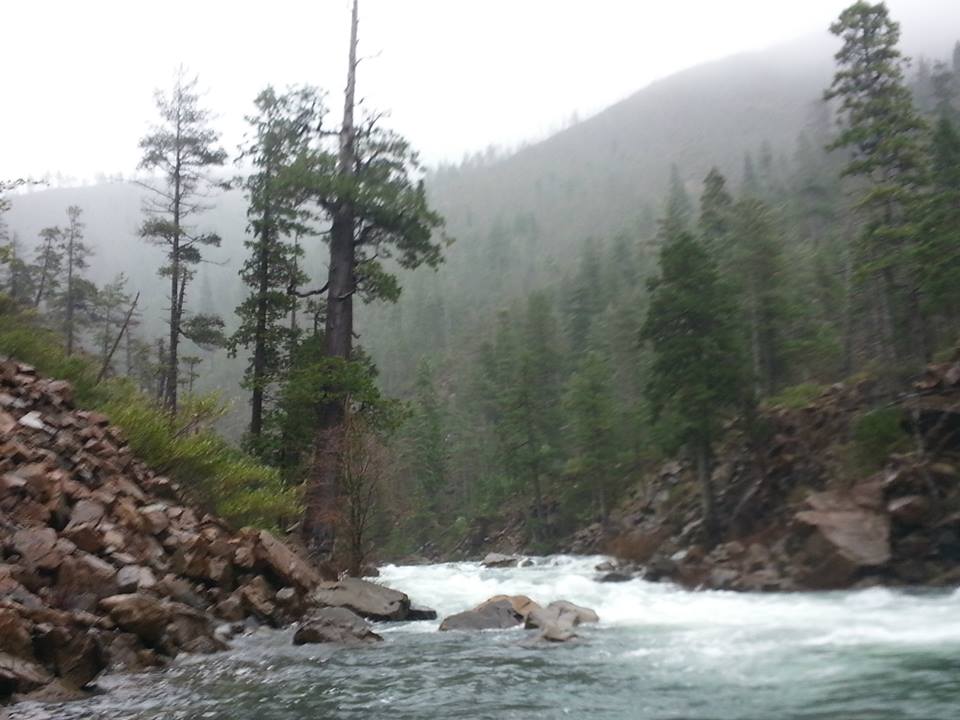 After Biscuit Creek, we started getting into the good whitewater.  Big clean powerful class 4 and 4+ rapids with a couple of 5s mixed in.  Dan and I were stoked as we worked our way through one good rapid after another. 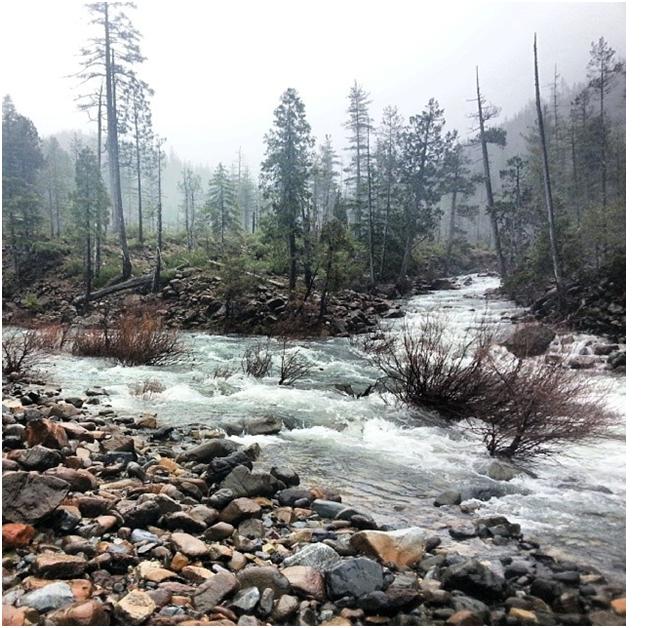 Baldface Creek is one of the Smith River’s most impressive tributaries, and is a significant spawning and rearing tributary for wild coho, Chinook salmon, and steelhead.  Despite the fact that it is eligible as a Wild and Scenic River, it is now threatened by a proposed nickel strip mining operation.  This crude form of hard-rock mining will essentially scrape the life off of entire hillsides.  It will damage air and water quality, and rare species, and inevitably introduce toxic pollution into a watershed that is widely considered to be one of the premier “salmon strongholds” of the lower 48. 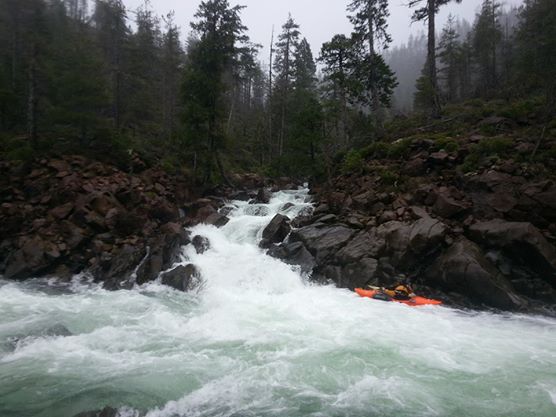 Unfortunately, Taylor Creek is where much of this mining is proposed to take place.

Baldface Creek is said to be in a “reference state” meaning that it is in pristine condition.  It is unique and remarkable due to the purity of water, botanical diversity, and distinction as one of the only watersheds free from Port Orford Cedar root rot disease (POCRRD) which is spread by vehicles.  If approved, the mine would cause irreversible damage to this amazing place, eviscerating the landscape, likely introducing POCRRD, and introduce toxic pollution to a known hotspot for coho salmon – an endangered species. 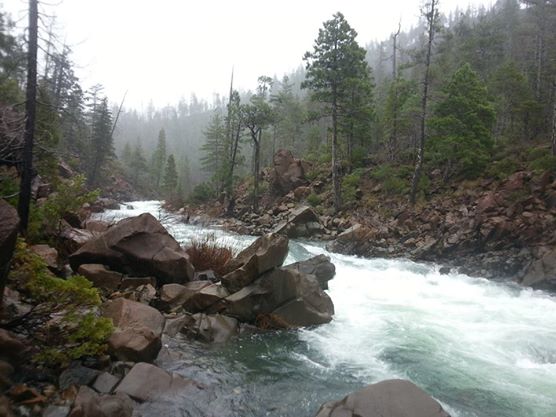 In 2013, the national conservation group American Rivers named Baldface Creek among the 10 most endangered rivers in the nation. Immediate action is needed to preserve this cherished botanical and recreation wonderland, and the rivers that flow through it, for present and future generations.

If permits from the Forest Service and other agencies are approved, a century of efforts to protect the Smith could fall victim to the price that China is willing to pay to a corporate giant in England -Tim Palmer

According to the E.P.A. hard-rock metal mining as the largest toxic polluter in the U.S.  Strip mining, road construction, and metal processing would devastate this precious, wild area, and turn one of North America’s most important rare plant centers and clean water supplies into an industrial wasteland. 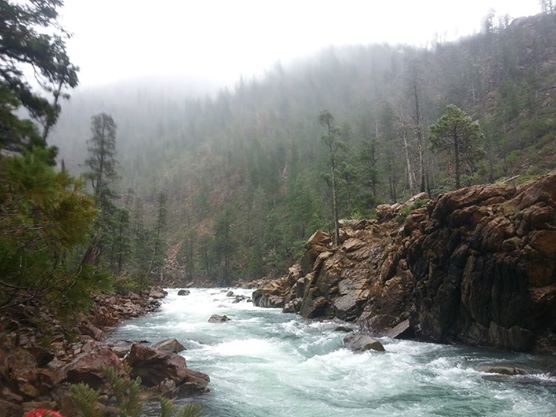 After the confluence with Taylor Creek, Baldface felt much more like the North Fork of the Smith.  The added flow created big waves and features, and carried us quickly downstream.  About 2 miles above the confluence with the North Fork, the creek makes a huge left turn at a place we called the Great Slide.  The entire right side of the river is an enormous slide that you can easily see from Google earth.  The constant slide activity invariably changes the rapid below.  At our flows, there was a huge river-wide ledge hole in the middle, and large boulders at the bottom with a sticky hole on the left. 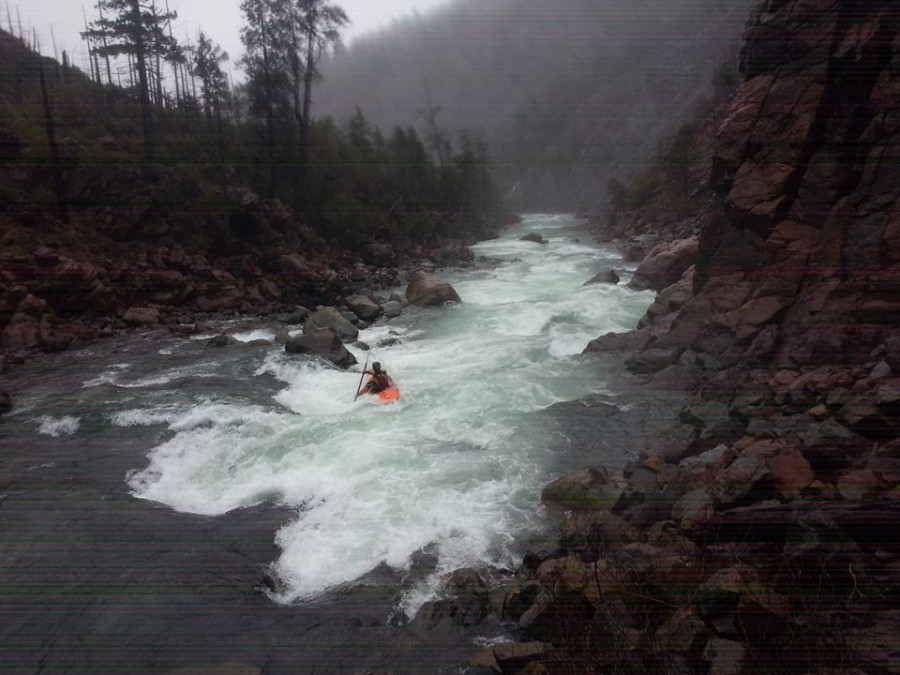 Below the Great Slide the creek changes character completely and drops into a lush rainforest for the remaining mile to the Northfork of the Smith.  Like an oasis, the forest is surrounded to the South and East by the serpentine barrens typical of the North Fork of the Smith and South Kalmiopsis.  Within a few miles we would be returning to the red rock and stunted trees, paddling the North Fork, back into California. 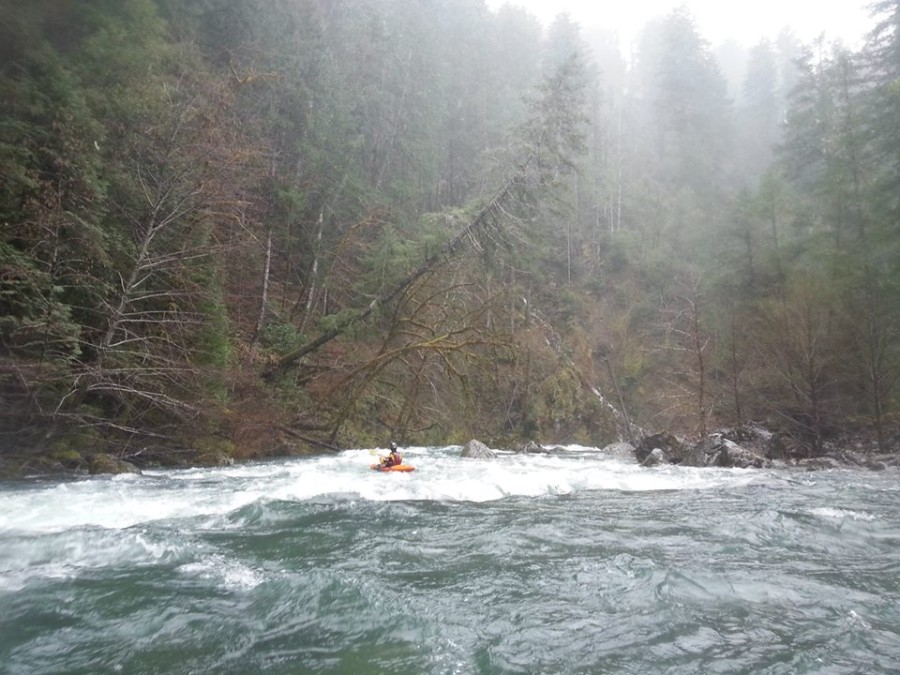 Into the lush rainforest

We stopped for lunch a mile above the confluence.With 17 miles to go and in pouring rain, it was time to fuel up.  We were making great time and loving the whitewater. Once in the trees, the creek started to gorge up and we encountered a beautiful large rapid with a huge undercut rock at the bottom.  We took the liberty of naming this rapid “Bowman’s Falls” after the legendary Scott Bowman who first descended Baldface creek by kayak over 20 years ago. 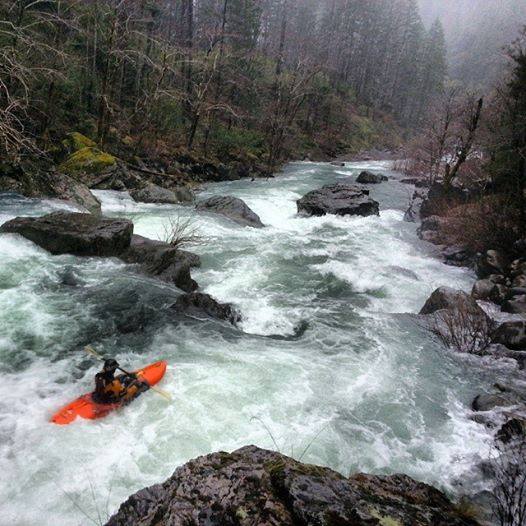 Blasting down the last mile of creek, we turned the corner with the North Fork of the Smith and headed south with twice the water.  It’s possible that we actually had more water on Baldface Creek than the Upper North Fork Smith.  Baldface is about the same size on a map, and some people even think that it should have been the true Upper North Fork instead of a tributary.  Within a mile, we reached the biggest rapid of the upper north fork. 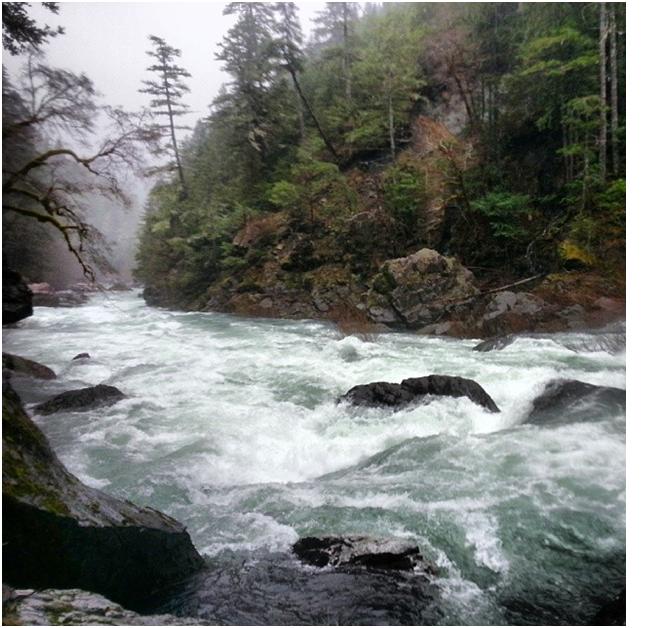 For lack of a better name, Upper North Fork Falls, is a series of ledges with big holes.  This rapid is bordering on class 5 because of a sketchy log just downstream. You can only scout the bottom ledge from the right, you can really only scout the top drop on the left, and you can’t ferry back and forth.  The first time down, we portaged the top on the right and then ran the second half far right.  This time, we scouted and enteredleft, and then made a hairy ferry across to finish by punching down the right side.  Watch out for wood downstream!

The next mile is filled with great class 4 rapids in a green canyon of towering trees, moss covered rocks and ferns.  A big slide on the left marks the edge of the forest. 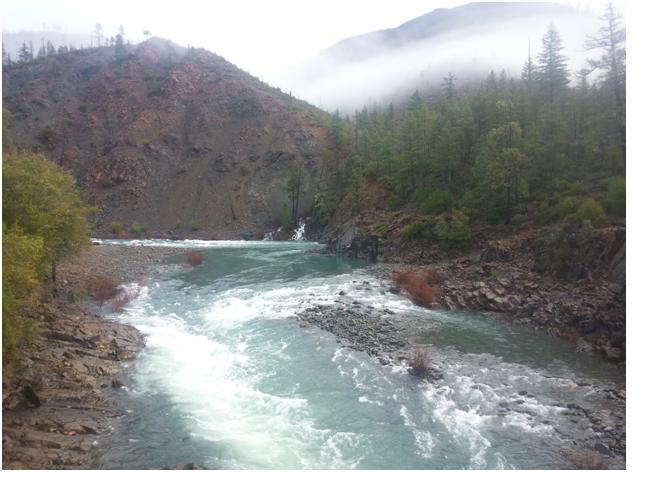 Moments later we were back in California.  Trading the moss covered forest for our familiar landscape of twisted trees, serpentine slides and red wall canyons.  We passed the put-in for the Classic run, and charged downstream, rallying the last 14 miles of awesome class 4 whitewater in about 2 hours. 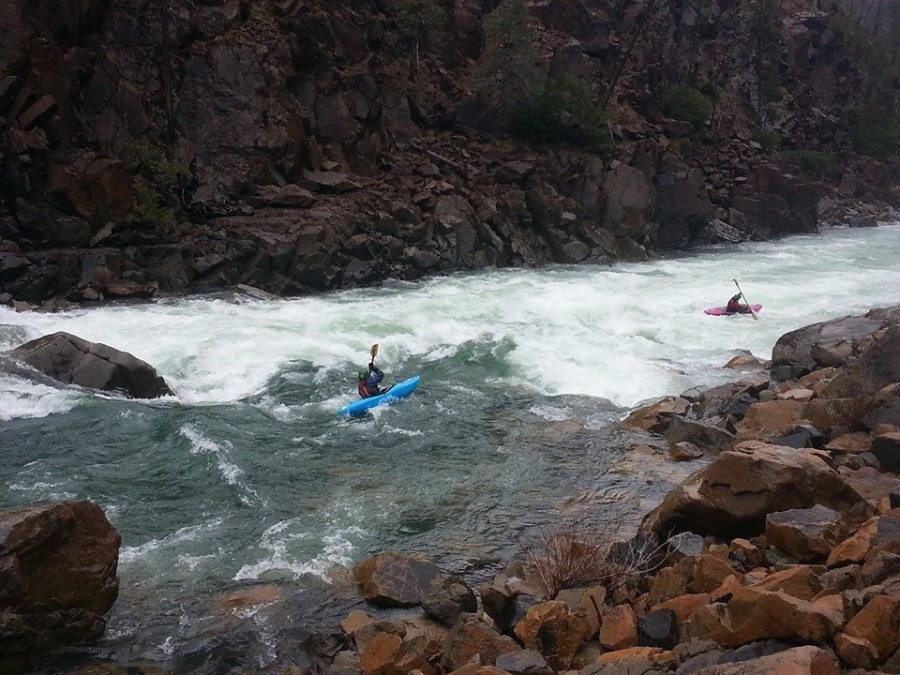 We had just as much fun blasting down the big wave trains of the Northfork as we did on the creek.  Takeout beer and warm clothes were waiting for us in Gasquet and we were home before dark – I couldn’t have asked for a better birthday. -J.R. Weir

Baldface Creek needs your help.  Please visit KS Wild and take action today!  It’s a quick, easy way to ask the Obama Administration to provide interim protection for Baldface Creek and its sister watershed Rough & Ready Creek by immediately withdrawing the watersheds from application of the 1872 Mining Law. Thank you!

JR's enthusiasm for life readily extends to all things whitewater and at Sundance, we consider him the guru of everything kayak. He spends his summers on the Rogue River as an awesome kayak instructor and during the off season, he gravitates toward any body of water that will give him some thrill. He tends to surround himself with others that share the same passion.
View all posts by JR →
← Smith River: Exploring The North Fork
Sundance Story: Marion Franck →