It’s almost summer and I canâ€™t wait. As I wrap up my spring in South Carolina, I’m excited to get back on the road and down to the Rogue River, but I’m still a little sad to be leaving. As the temperatures here start to hover near ninety degrees, I start to get nostalgic for the winter’s drysuit weather – hot cider and the relief of feeling my extremities come back to life in a warm car at takeout.

Winter boating in the southeast is great. It’s amazing how many runs there are that are within such a convenient driving distance. However, I’ve barely scratched the surface of all the rivers in the area (which is saying something since I’ve been boating here for more than a decade). When my boating friends read this, I’m sure they’ll roll their eyes and say its because I only ever want to do one river – the Chattooga.

Truth is, they’re right. I simply canâ€™t resist it. 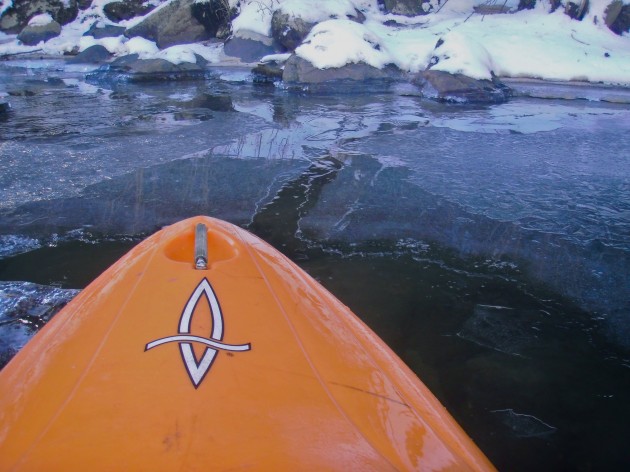 Nate's boat breaking the ice on the shore of the Chattooga

I’ve run the Chattooga countless times and you’d think I’d get tired of the same run, but that’s just it, I never do. Once I get to take out, my whole week after becomes consumed with mentally critiquing my previous run and an anxiousness to get back and smooth out a sloppy line, catch a different eddy, or find a new boof.

The culmination of my obsession with the Chattooga is a rapid called Bull Sluice. It’s the first rapid I ever attempted and it’s by far the basis of my obsession. Even the slightest change in water level affects the nature of the rapid and therefore the line you run (which is the irresistible part of running the Chattooga). The river comes around a sharp turn (a nervousness-inducing blind turn if youâ€™re coming in from above), with both the sneak and main lines guarded by a temperamental hydraulic that loves anarchy. If you flip in it, there’s generally just enough time to roll up, gather that you’re badly off line and then proceed to eat it in front of a large crowd that has gathered solely to watch you flip and fail – fun for them, not so much fun for the unassuming kayaker.

Regardless of what the Bull has in store, there is a large recovery/celebration pool afterwards, and another five miles of class II to V of whitewater below if you’re ready for more. With a multitude of access points up and down the river, the Chattooga literally offers something for anyone.

Above Bull Sluice (section III), there are plenty of rapids with significantly less gradient and consequence than their downstream brethren. Swims are less serious here, and the distance in between rapids provides ample time to regain your confidence (and your breath) before the next gnar-signaling horizon line. If you choose this section, you can also boast about your run through the Narrows (class III) and people will commend you for your bravery, thinking you attempted the more famous class V creek in nearby North Carolina.

Before kayaking techniques and equipment caught up to modern standards, the lower section (section IV) was once at the forefront of what was considered possible to run in a kayak. Although it still shouldn’t be taken lightly, it’s more of a training ground than a test section. Choosing this section gives paddlers several miles of class III warm up before the gradient picks up, beginning in earnest at the aptly-named Seven Foot Falls and eventually culminating in a several hundred yards long jumble of hydraulics, undercuts, and boofs known as Five Falls. After that, there’s a two mile paddle across a lake, a hike back to your car, and (while your extremities are slowly returning to normal temperature), the building anticipation of your next run on the Chattooga.

The Chattooga may be in my rear view mirror for now and although I’m already missing it, I am looking forward to finding some new favorites on the way back to the Rogue. With planned stops in Colorado, Utah, and of course the Columbia River Gorge, I donâ€™t think that goal will be too difficult.

Sundance Kayak School was started on the Rogue River in Southern Oregon way back in 1973! And was created for one very specific reason: to teach whitewater kayaking. Sundance Kayak School is dedicated to sharing the love of rivers and paddle sports through Education, Involvement and Enjoyment.
View all posts by Team Sundance →
← Upper Clackamas Whitewater Festival
Kayaking the West Fork of the Hood River →