Getting ready to put in

Spring time in the Kalmiopsis of Southern Oregon is a magical thing. These dynamic coastal mountains are teeming with unique flora and fauna and the pristine watersheds found within them have long been the focus of local boaters such as myself.

With a warm spring rain starting to fall, I abandoned plans to run the temperamental Illinois River (which was predicted to spike) in favor of the sweet flows of the more exotic creeks in the area. I met up with fellow Sundancer Zach Collier and paddlers Kevin and Dan for an exploratory run down the North Fork of Rough and Ready Creek (see Zach’s trip report) and the following day, we set our sights on Upper Josephine Creek.

The road to the put-in was steep and muddy, but Zachâ€™s unnamed beast of a Dodge made short work of the shuttle and after about an hour of bouncing and crawling into the mountains we found ourselves putting onto the Upper Jo. With an estimated 400 CFS, the creek was relaxed and manageable. We decided that much less water would have been a little scrapey, and the run could have accommodated quite a bit more flow before becoming too high.

The creek is so beautiful and intimate. We warmed up for a good mile of of technical class II-III rapids before the first major horizon line. The falls was 8 feet from top to bottom with a sloping entry that pushed super hard from left to right. The main flow ran right of center with a green tongue hammering onto a shallow rock in the landing zone. This was mandatory a boof (preferably to the left to avoid landing on the rock). Although I did hit rock with my stern, I had a good line and a lot of fun!!

JR getting ready to run Weir's weir. For the full sequence, click the photo above.

The raft lined easily down the right and portage/ safety set left. Scout left or right. Be sure to catch an eddy before the next rapid. 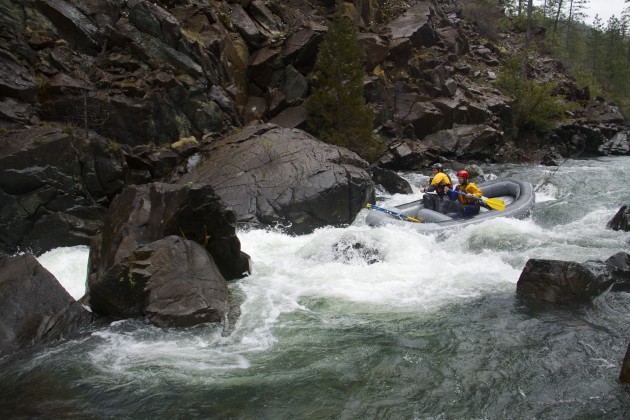 This may very well have been a first rafting descent due to the long hike/scramble to put in.

The second large rapid is a pinch down the right, to the right of an undercut mid channel rock which is guarded just upstream by another rock. The right/ raft line was far right, over a little pour over, then squeaking right of both rocks. There is an eddy on the left that was very hard to grab. Kevin was almost rejected back into the undercut rock but managed to superman his way in. This eddy provides good safety at the undercut, an easy portage, a vantage for taking photos, and a sneak route for kayaks, although the safest line may be the far right.

Below the pinch rapid were a couple of fun class III-IV ledges and another good horizon line at a sharp left hand bend. We scouted on the left and it turned out to be mellow III+. This drop sort of marks the end of the bigger rapids. A mile downstream, Canyon Creek comes in on river left, nearly doubling the flow, and from there, enjoy many fun class II rapids up to the confluence with the Illinois River. The overall character of the upper section down to Canyon creek is scenic class II-III with a point for creekiness and a point for remoteness. The first big drop is a portage-able IV+ single move, must boof, piton potential with a good recovery pool, and large rapid just downstream. The second big one is a class IV pinch move with an undercut, good recovery pool, and a class IV+ sneak.

This is such a beautiful creek in a remarkable geographical area. It reminded me a lot of Diamond Creek of the North Fork of the Smith River to the south. The Illinois confluence happens at the base of an interestingly round hill called 8 dollar mountain which dominates the immediate landscape. There is a lot of mining activity on the lower section of Josephine below Canyon Creek, and although the miners we met were friendly and helpful, mining continues to be one of the biggest pressures threatening the creek’s fragile ecosystem.

The Illinois River was flowing near 6500 cfs and from 8 dollar mountain road on river right, just upstream from the confluence, we saw one of the sweetest river-wide giant constriction surf waves ever. With long return eddies on both sides, this one has to be a known wave and probably has a name. Worth checking out.

The constriction surf wave above the confluence

JR's enthusiasm for life readily extends to all things whitewater and at Sundance, we consider him the guru of everything kayak. He spends his summers on the Rogue River as an awesome kayak instructor and during the off season, he gravitates toward any body of water that will give him some thrill. He tends to surround himself with others that share the same passion.
View all posts by JR →
← Zach reviews the Double D Drysuit
Showdown on the Sandy River →