The Little Klickitat River flows out of the desert about 30 miles east of White Salmon in the Columbia River Gorge. It is one of those special runs that only comes in maybe one day a year during extreme high water, and when itâ€™s in, it’s on! Zach Collier and I, from Team Sundance, met up with class V boaters, Jason â€“ it was his birthday â€“ and Tim Thornton, owner of River Drifters, for a rare and exciting trip down this Southern Washington classic. 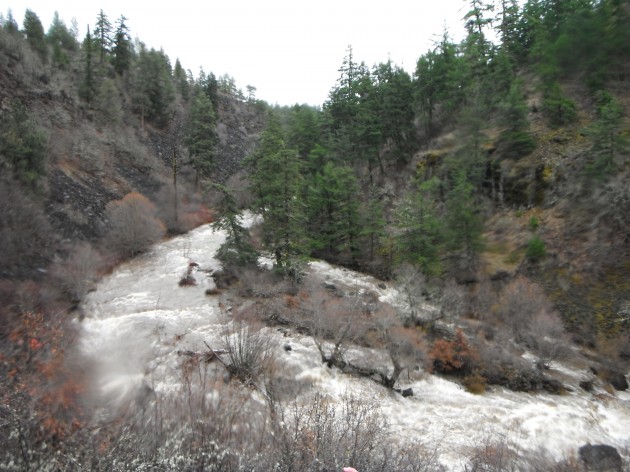 Of course, the night before, I had been pouring over my Soggy Sneakers guide book and OregonKayaking.net trying to imagine just how sweet it would be. The pictures didnâ€™t look too scary and the write-up said that the authors had run it at a medium flow, so I wasnâ€™t particularly worried about high water â€“ after all, thatâ€™s what this creek needs to run.

But thanks to a solid 2-weeks of rain, the river was high. In fact at 1200 cfs, it was a good 200 cfs higher than the highest recommended flow. Arriving at the take out, Tim admitted that the creek was higher than he had seen it, but we all agreed that it looked good to go despite the chocolate color. 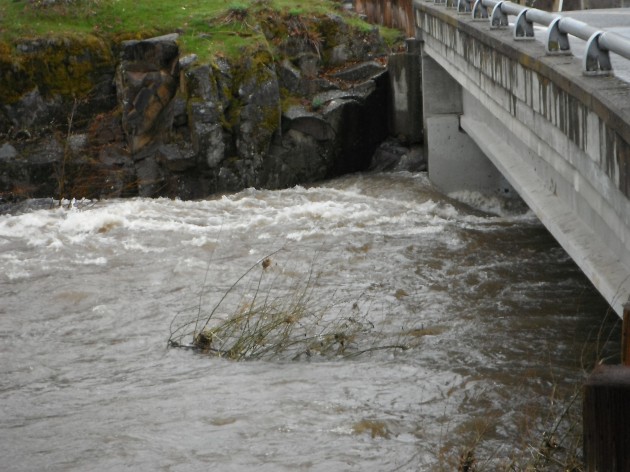 Visual Gauge for the Little Klickitat

We put in for the 10 mile run near a small bridge, and set off into the mysterious, twisting alleys of willows that lead to the first big drop, and the only recommended portage. Floating with glee and complacently following Tim at a distance, I floated around a corner just in time to see Tim catch the last micro eddy at the lip of a huge, surging horizon line. With nowhere to go in the fast current, I floated by Tim as he recommended that we go left.

Following Zach, I boofed into the left channel and was immediately back endered. Rolling up in the fizz I had just enough time to see Jason swim past, followed by his boat. After hastily towing Jason into the safety of the willows, Zach and I pursued his boat through a couple of blind drops before reluctantly ending the chase. 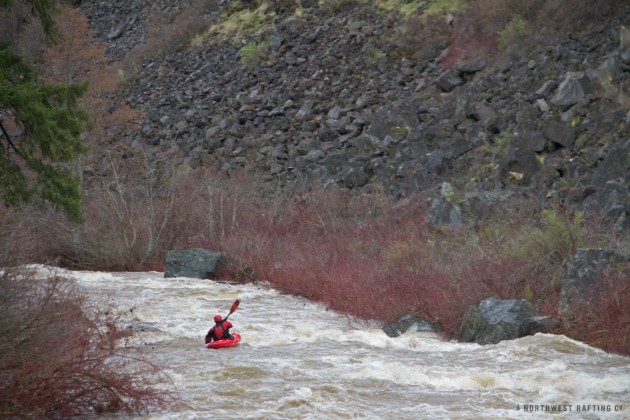 Our team grouped up and it was decided that our soggy friend would hike out while the three of us continued into the swollen gorge below. After some continuous class IV, we came to the next major rapid on a right hand bend in the river which we ran down the left, punching a river wide hole at the bottom. Just below that, while scouting another stout looking, but surprisingly soft, river-wide hole, another group of local boaters caught up to us, including a raft with expert rafters Hans Hoomans, and Ben Ohmart. Joining forces, we stomped the ledge and continued into the canyon, enjoying continuous class IV+ whitewater and loving every minute. 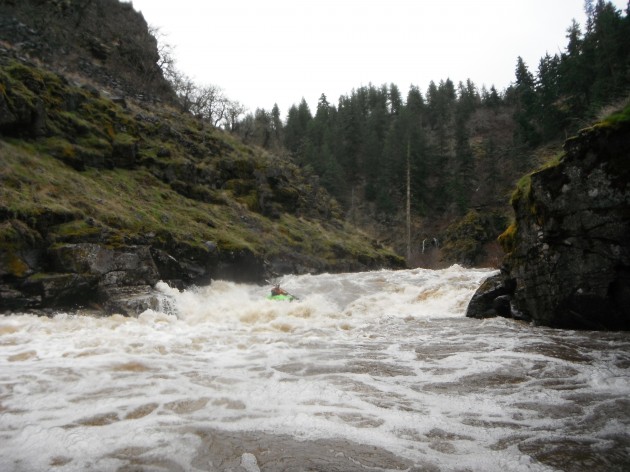 Zach in the Slide

At last, we arrived at little Klickitat falls, an impressive 17 foot waterfall in a particularly wide section of canyon. This little baby is super clean and a great finale to the run. The falls are best run middle and left, and everyone in the group had clean boofs, including the raft. 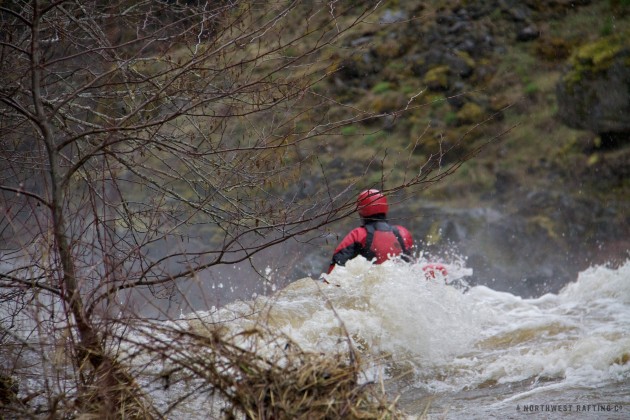 J.R. Going Over the Lip of the Falls 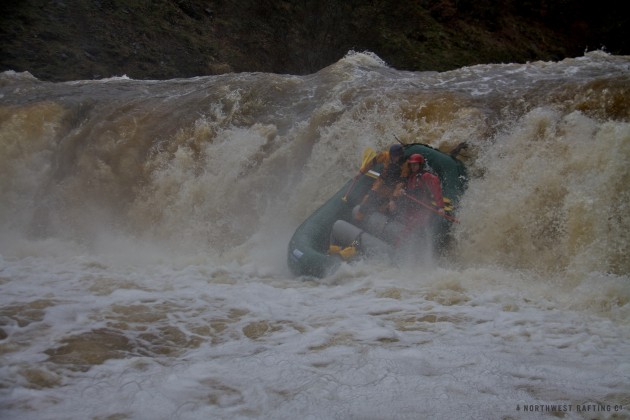 Raft Going Over the Falls

At 1200 cfs, the last 3 miles below the falls were class III-IV with a handful of beefy holes worthy of respect, although the guide book calls this section class III-IV at normal flow. The run comes with a class IV+ rating between 400-1000 cfs, but I would say that many of the sections at high water border on class V due to the rapids being so continuous and for the simple fact that a swim would almost certainly mean a lost boat in an inaccessible canyon. 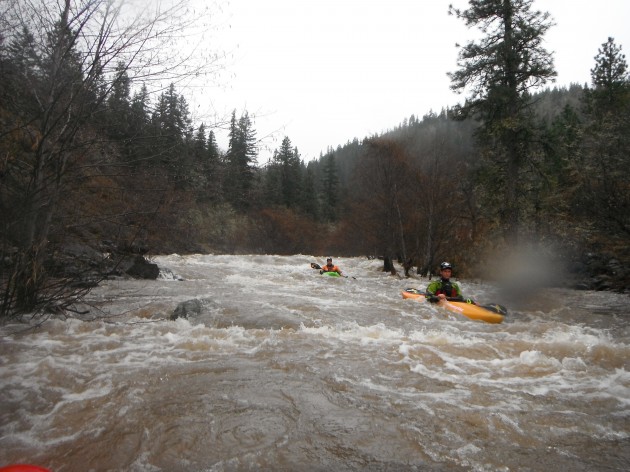 It was a real treat to experience this exotic beauty on the one day of the year when it runs. Despite his swim, Jason was in good spirits at the takeout, and we were able to recover his boat and paddle some more that afternoon in time for birthday foolishness. All of the fine folks on the river with us were great paddlers and great lovers of kayaking. It was awesome having the great energy and sharing some camaraderie at take out!

Telling Stories of a Great Day at Take-Out

This is a must run for paddlers who have the skill, on the rare occasion that it flows. The flow felt pushy but manageable provided that you are on your toes, but I probably wouldnâ€™t want to do it any higher. This was a good way to round out one epic week of Team Sundance boating, and prepare for the next. Next stop: the long awaited Baldface Creek into the Upper North Fork of the Wild and Scenic Smith River!

JR's enthusiasm for life readily extends to all things whitewater and at Sundance, we consider him the guru of everything kayak. He spends his summers on the Rogue River as an awesome kayak instructor and during the off season, he gravitates toward any body of water that will give him some thrill. He tends to surround himself with others that share the same passion.
View all posts by JR →
← Recap: 2012 Upper Wind River Festival
West Fork of the Hood River →