Did you know the Smith River is the largest free-flowing river in California? This rare gem is a kayakers paradise with 3 runnable forks. From Class 1 to Class 5, the Smith has it all. Even though the Smith is protected under the Wild and Scenic Rivers Act, it’s headwaters in Oregon remain unprotected. Team Sundance set out to explore these upper reaches of the North Fork Smith River and its tributaries. 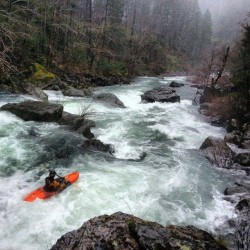 Tributary to the North Fork Smith River, this pristine wilderness is being threatened by mining. Baldface is considered  to be in a “reference state” meaning that it is in pristine condition.  It is unique and remarkable due to the purity of water, botanical diversity, and distinction as one of the only watersheds free from Port OrfordCedar root rot disease (POCRRD) which is spread by vehicles. Dan Menten & J.R. Weir got the rare opportunity to run this creek on J.R.’s birthday! Help protect this threatened tributary. 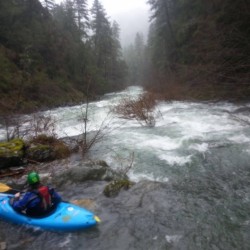 Unlike the lower portion, the Upper North Fork Smith winds it’s way through forested canyons, giant ferns, moss covered rocks and willow corridors. These upper reaches are actually located in Southern Oregon. It was remarkable to see the abrupt change of scenery as you cross into California and areas impacted by the 2002 Biscuit Fire. This rarely run section was quite a treat and well worth the mile hike-in through old growth forest. 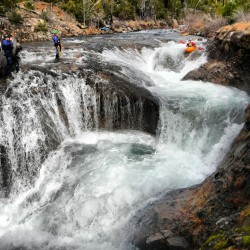 Tributary to the North Fork Smith, this exotic creek is on the outskirts of the Kalmiopsis Wilderness. Serpentine soils, crystal clear water and banks covered in carnivorous Darlingtonia Californica make up this unique gem. The drive in to this creek proved to be just as exciting as the run itself. If you ever get a chance to explore this drainage, I would highly recommend it! 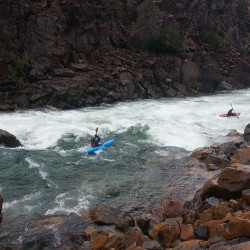 Flowing through the Siskiyou National Forest this is a true whitewater gem. The North Fork Smith is known for it’s clear water, abundance of Darlingtonia Californica, exotic waterfalls and remote wilderness. A local favorite, this 13 mile run is filled with fun, exciting rapids and jaw dropping scenery. If you ever have a chance to get on the run, don’t hesitate! Our friends at Indigo Creek Outfitters offer rafting trips for those not savvy in your own craft.

Over 300 miles of the Smith River is protected, designated either wild, scenic or recreational, and it’s one of the longest rivers in the National Wild and Scenic River System. To learn more about the Smith River and ways to protect this rare treasure, please visit www.roughandreadycreek.org and Smith River Alliance.

JR's enthusiasm for life readily extends to all things whitewater and at Sundance, we consider him the guru of everything kayak. He spends his summers on the Rogue River as an awesome kayak instructor and during the off season, he gravitates toward any body of water that will give him some thrill. He tends to surround himself with others that share the same passion.
View all posts by JR →
← Sundance Kayak School: Year In Review
J.R. Explored Baldface Creek →