Taylor Creek – a magical tributary to the Rogue River

Taylor Creek is an exotic tributary of the Rogue River. It flows into the recreational section of the Rogue near Morrison’s Lodge. It also happens to be the place where Sundance’s beginner schools train throughout the summer.

While on a boating safari this spring, Zach Collier and I visited the Smith River in Northern California. After some exploration and a fun run on Patrickâ€™s Creek, we returned to Sundance expedition headquarters, AKA. â€œThe Doublewideâ€ in Southern Oregon to plan our next move.

We were keen to check out some of our backyard runs. While researching another local tributary â€“ Jump off Joe Creek â€“ we came across some headcam video from a group of local boaters.

The footage showed a tight mossy canyon with narrow technical drops and a fair amount of wood. It looked magical, and the put in was only a few miles away. The next day, Zach and I parked our shuttle at Morrisonâ€™s Lodge and drove the four miles to the Taylor Creek Trailhead. 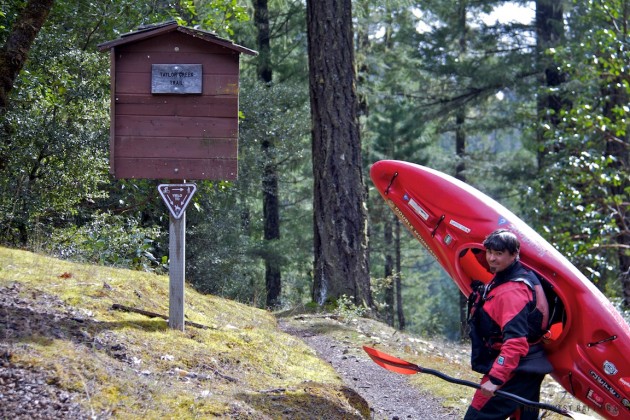 J.R. at the Taylor Creek Trailhead

A short walk down a steep hill found us putting on to about 300 CFS above the gorge. The creek dropped quickly into slick, steep, canyon walls, with narrow class IV drops and several blind corners. 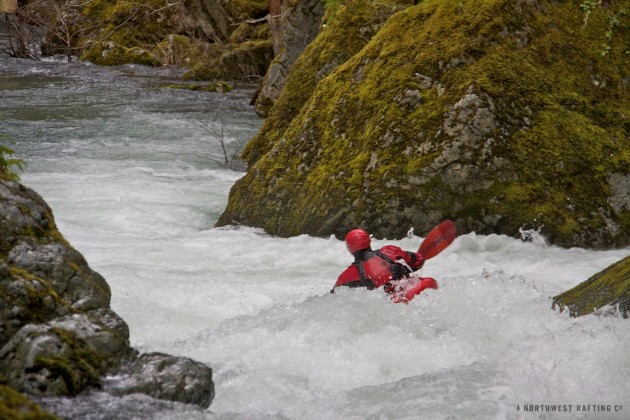 J.R. Running one of the first big drops!

It quickly became apparent that we had quite a bit more water than what we had seen on the video, but it didnâ€™t seem too pushy. However, I had the feeling that I wouldnâ€™t have wanted to see it much higher. The right flow is particularly important in regard to a few creek-wide strainers set in vertical walls with very small eddies above. We had to get creative with two or three of these portages, climbing on slippery walls and balancing our boats on logs to get back in the water. 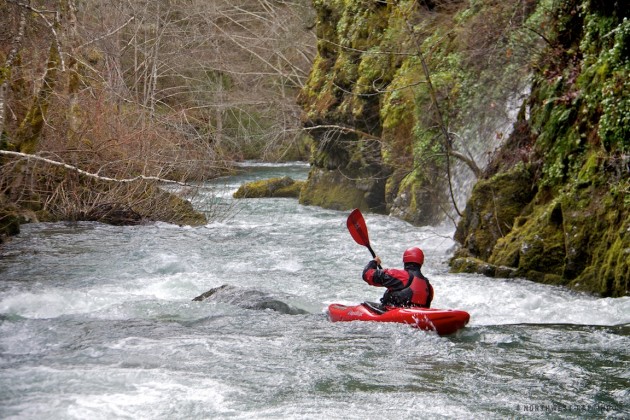 In the Heart of Taylor Creek Canyon

As we descended deeper into the misty canyon, we were careful to observe good scouting practices, and not push too hard around corners. About halfway through the run, a breathtaking waterfall poured in on creek right and we took a moment to appreciate how awesome it was to be there. 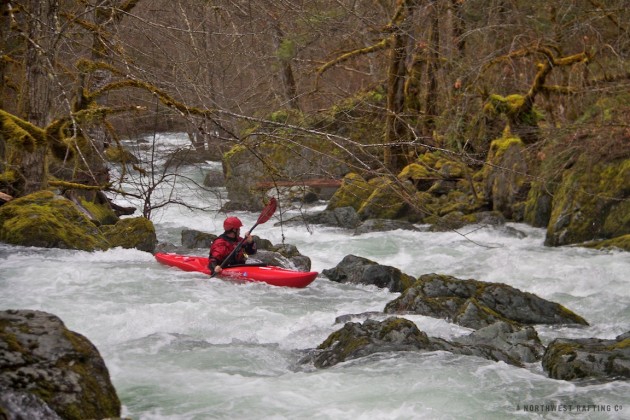 One of the more complex rapids near the end

Downstream, we found some long, complex boulder gardens that turned out to be the best rapids. Soon, the clear, green water of Taylor Creek became a silty brown as it deposited us into the swollen Rogue River.

I would recommend this run for expert kayakers only. The overall difficulty of the rapids is in the IV+ range, but the canyon is extremely committing, and wood hazards are everywhere. At the flow we ran it, at least one of the six wood portages, had a class VI must-make eddy.

JR's enthusiasm for life readily extends to all things whitewater and at Sundance, we consider him the guru of everything kayak. He spends his summers on the Rogue River as an awesome kayak instructor and during the off season, he gravitates toward any body of water that will give him some thrill. He tends to surround himself with others that share the same passion.
View all posts by JR →
← 2012 Clackamas River Festival
Review: Wave Sport Diesel 80 →