My first, and so far only, experience with kayaking took place in June 2011 with Sundance Kayak School on the Rogue River. In the past, I have taken many canoe camping trips with my son, and other members of my family. As a result I expected that although kayaking would be challenging I would pick up the paddling fairly easily. Nothing could have been further from the truth. 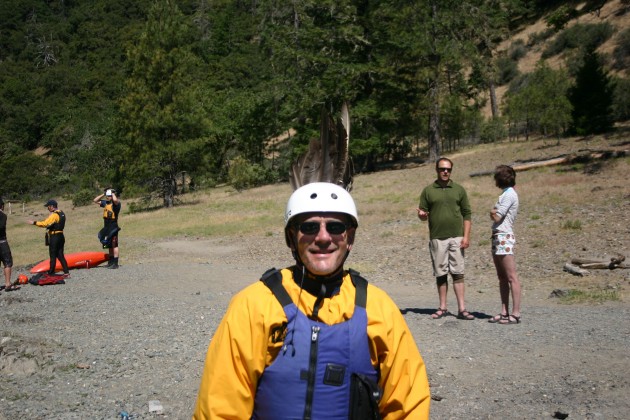 Big Chief Jim in Kayaking Attire on the Rogue River

We spent our first hour or two learning how to get into and out of our boats. After that we headed upstream about 100 yards in calm water to begin learning how to ferry and peel out into the current. I watched as each paddler in our group turned upstream, making smooth and steady progress until they reached the point where J.R. Weir, our lead instructor, was waiting for us to regroup and begin the lesson. When my turn came, I also turned upstream and almost immediately realized that I could not get my boat to head in the direction I intended. I was so bad that I was completely exhausted by the time I struggled up to where everyone was gathered. Throughout the rest of the first and second day of instruction I was certainly one of the worst, if not the worst paddler, in our entire group (and we had a really big group including nine members of my extended family). Our instructors, however, continued to be positive and kept telling me that things would get better. I had my doubts. 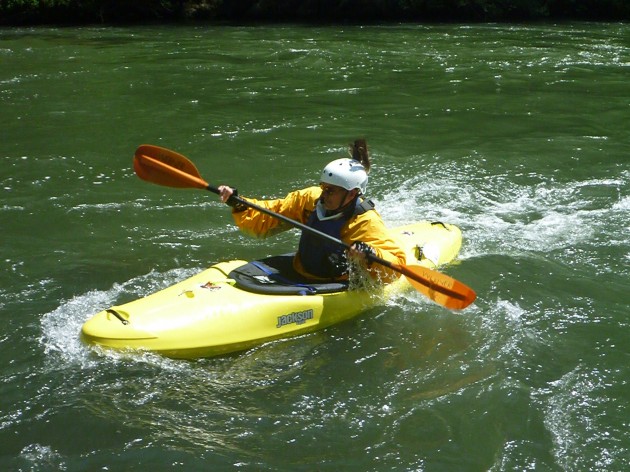 The third day of our class was the beginning of our trip downriver. To say that I was unprepared for what was ahead of me would be a profound understatement. Within half a mile of where we put in, I had already flipped once in calm water and was T-rescued by Drew Austell, who was rapidly becoming my wingman. In each of the rapids we ran that day I turned at least one complete revolution in the middle of the whitewater. I have no idea how, but in every case I somehow managed to keep going downstream. In camp that evening J.R. came up to me and said he was impressed that even though I had a lot to learn about hitting my lines through the rapids, I had “excellent balance, and a flair for the dramatic in the whitewater”. 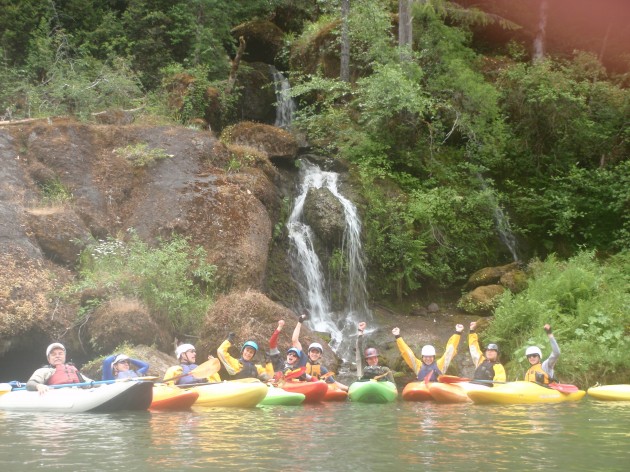 Group Photo on the Rogue River

The next day was the toughest day we had all week. After lunch we finally reached Grave Creek marking the beginning of the wild and scenic area. As I recall, perhaps one or two of the student kayakers made it through the Grave Creek rapids right side up. J.R. called our experience “a yard sale.” We still had miles and hours to go. As the day wore on, my nephew Steve Higgins and I were swimming more and more often until finally we were both on, as J.R. put it “full hover mode”. This meant one instructor to one student. Steve had Susan Hollingsworth and I had Lance Reif. To end the day we still had to run the Tyee Bar Rapids. 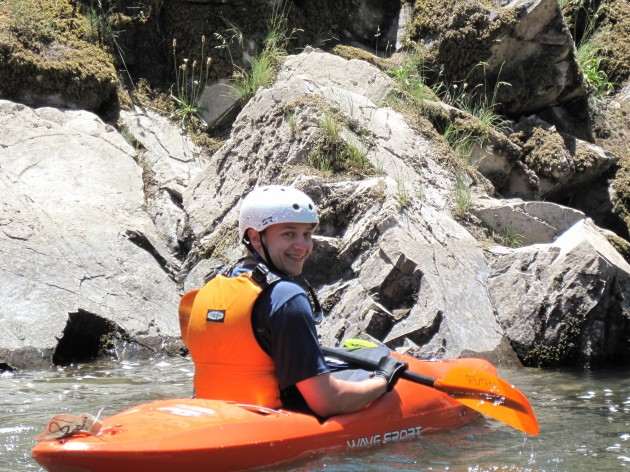 As was the case with all of the larger rapids we met in groups just upstream from the entrance and plotted our strategy. Tyee called for an entry on river right and a move across the stream in the middle of the rapids to exit in calm water on river left. I think I managed to enter properly, which was an unusual victory for me but I was unable to move far enough to my left on exit. As a result I went right through the huge wave train in the center of the stream. Susan was on shore by then and she managed to get a great picture of Lance and I at that point. In the picture Lance is screaming at me to “GO LEFT JIM, GO LEFT” towards the calm water in the background. Amazingly, I made it through upright and crash landed at Tyee campground where we spent the night. 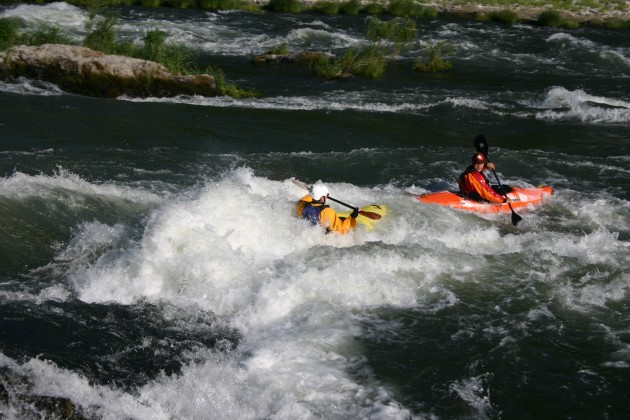 Jim and Lance at Tyee

The next two days were a little better for me. I was staring to be able to get my boat to go somewhere near where I was aiming. At the of our sixth day my son Jimmy and I spent a short while with Drew trying to learn to surf in a really small and calm ripple that was perfect for beginners. Once or twice I really did surf for a few seconds. On my last attempt, however, I flipped on exit and Drew had to rescue me. I was so tired, unfortunately, that I couldnâ€™t manage to flip myself in a T-rescue so finally Drew grabbed my boat and turned me upright in what he called a â€œRescue from Godâ€. He certainly saved me that time. That night we had a great time camping at the Rogue River Ranch, swimming in the creek, and playing glow in the dark Frisbee.

The next two days were a little better for me. I was starting to be able to get my boat to go somewhere near where I was aiming. At the end of our sixth day my son Jimmy and I spent a short while with Drew trying to learn to surf in a really small and calm ripple that was perfect for beginners. Once or twice I really did surf for a few seconds. On my last attempt, however, I flipped on exit and Drew had to rescue me. I was so tired, unfortunately, that I couldnâ€™t manage to flip myself in a T-rescue so finally Drew grabbed my boat and turned me upright in what he called a “Rescue from God”. He certainly saved me that time. That night we had a great time camping at the Rogue River Ranch, swimming in the creek, and playing glow in the dark Frisbee.

The next day as we gathered for the morning run the instructors told us that we were about to enter Mule Creek Canyon. They explained that this formation included the most turbulent water we would encounter during our entire trip and they said that any rescues in the Canyon would be difficult at best and at times almost impossible. They wanted anyone who was at all uncomfortable with this to ride the rafts at least until we were out of the Canyon. Iâ€™m sure they were shocked and perhaps dismayed when I said that I wanted to paddle! To their credit they let me go ahead, but Iâ€™m sure they were as close to me as they could get the entire time. Amazingly, I made it through the entire Canyon, including the Coffee Pot, without tipping once! I think this marked a turning point for me. I was really starting to feel like a kayaker. We gathered and celebrated at the end of Mule Creek Canyon, and took a few great pictures. 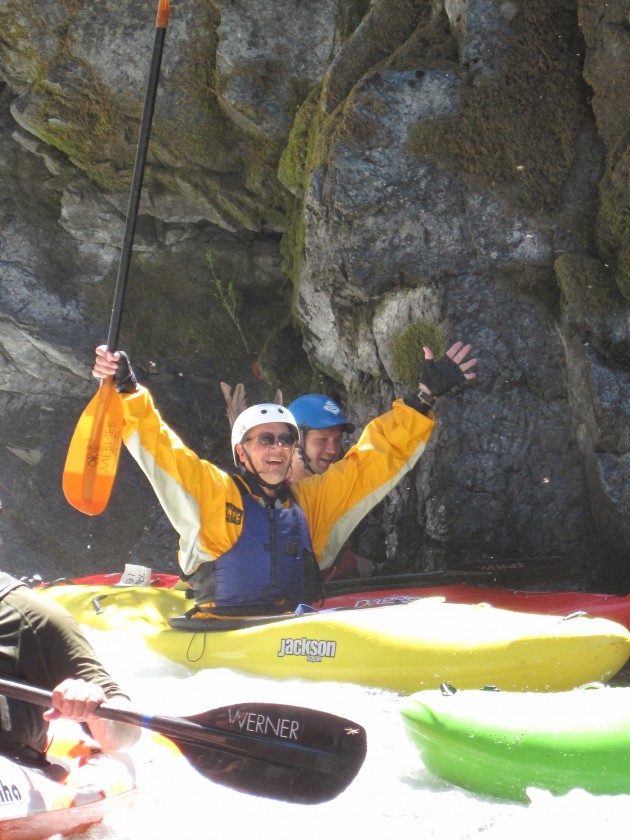 The Author Celebrating After a Successful Run Through Mule Creek Canyon

That night was our last on the river and included dare wear, stupid human tricks, great stories, naming the instructors after our favorite super heroes, cribbage and incredible bonding. We had become one oversized extended family, and it felt great. I was looking forward to one more day on the river, but I was sad that our trip was coming to an end. 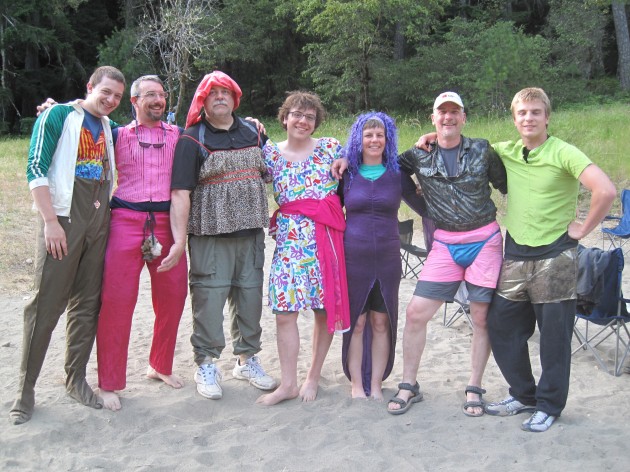 Our last day on the river was perhaps the calmest water we had seen since our first day of instruction. What I remember from that day was that it was the only day I was right side up for the entire day. By the middle of the afternoon, we came to a wide calm stretch in the river and J.R. said that some people wanted to try seal launches. When he explained to me what a seal launch involved, I was skeptical that I was up to the task, but I asked J.R. if I could do it and he said “Absolutely”. I’ve included a couple pictures of my seal launch and my favorite one is of J.R. in the background as excited as I was when I did it! I had come from not being to paddle upstream 100 yards in calm water to seal launching in just 10 daysâ€¦what an amazing transformation. 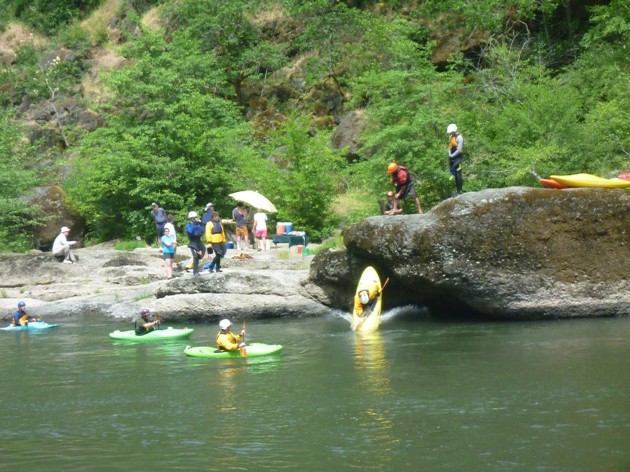 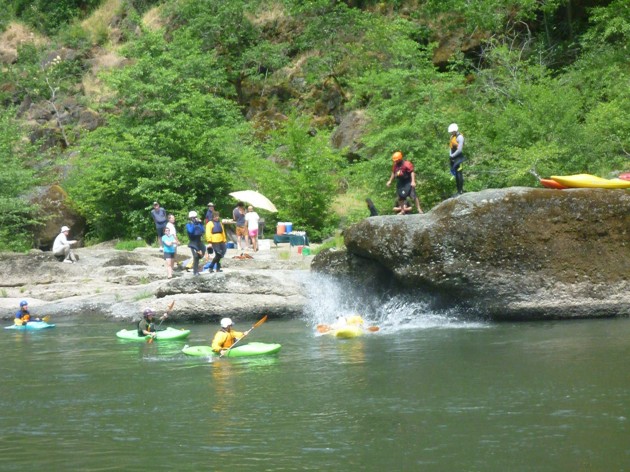 I am proud and excited to be a member of Team Sundance, and I canâ€™t wait until Iâ€™m able to take another trip downriver!

Posted on March 21, 2012 by Team Sundance in Trip Reports

Sundance Kayak School was started on the Rogue River in Southern Oregon way back in 1973! And was created for one very specific reason: to teach whitewater kayaking. Sundance Kayak School is dedicated to sharing the love of rivers and paddle sports through Education, Involvement and Enjoyment.
View all posts by Team Sundance →
← Safety on the river
Stretches for Paddlers →