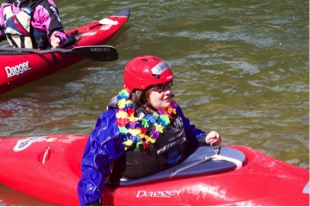 The question of why do I want to kayak is a good one. It is something that I have given a lot of thought to over the last month and this would be my best answer:

When I was at my week long First Descents program people kept saying the river is a great equalizer, and I always rolled my eyes. To me at the time it felt like the biggest pain in the bum, a challenge to overcome every day something that was just making me angry and my body sore. Every day I would wake up early and make peace with the Clark Fork River and every day we would go at again, it was not until I got home that I realized what was meant when people said the river being a great equalizer. I laughed every day, I got a workout like no other every day, I got to hang out with really cool people every day, and most of the entire river didn’t care that I have two different medical conditions that make me different. 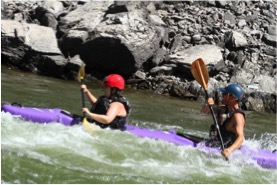 Close to ten years ago I was diagnosed with a condition called Idiopathic Intracranial Hypertension (IIH), which Wikipedia says is this: “is a neurological disorder that is characterized by increased intracranial pressure (pressure around the brain) in the absence of a tumor or other diseases. The main symptoms are headache, nausea, and vomiting, as well as pulsatile tinnitus (sounds perceived in the ears, with the sound occurring in the same rhythm as the pulse), double vision and other visual symptoms. If untreated, it may lead to swelling of the optic disc in the eye, which can progress to vision loss.” Think brain tumor without actually having one, IIH has caused me to have dozens of surgeries, including 2 brain on the brain and two on my eyes.

Three years ago I was diagnosed with Non-Hodgkin’s Lymphoma, woohoo! Cancer and a rare neuro condition 😉 I underwent 8 rounds of chemo for that which did manage to send it in to remission but the combo of the two illnesses has been really hard on my body, and the people around me. It was not until January this year 2.5 years after cancer diagnoses and 1.5 years after I got the all clear did I decide I wanted to try First Descents, and I had no idea what kind of life changing adventure I was getting myself in to. 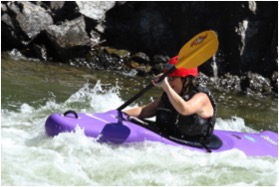 All smiles while kayaking at First Descents

Being in a kayak has been the most free, and the most capable I have felt. It was a hard week, but kayaking gave me back, part of myself I didn’t even know was missing. Kayaking has been the only thing sense I first became ill that I felt like I was succeeding at (no matter how hard!!) What I love and now understand is that the river treats everyone equal. I could keep going but I will spare you.

Hannah continues to pursue her passion for kayaking. J.R. had the privilege to paddle with Hannah on her home river, the McKenzie River near Eugene, OR. Thanks Hannah for sharing your story and passion for kayaking. It’s a constant inspiration to others and reminder we all need to be “Out Living It”.

JR's enthusiasm for life readily extends to all things whitewater and at Sundance, we consider him the guru of everything kayak. He spends his summers on the Rogue River as an awesome kayak instructor and during the off season, he gravitates toward any body of water that will give him some thrill. He tends to surround himself with others that share the same passion.
View all posts by JR →
← Reading Water and Rapid Classification
Smith River Clean Up →